We offer a full range of tree management services including felling, thinning, crown reduction and reshaping, dead-wooding, lifting and pollarding. Our tree surgeon services are available in Welwyn Garden City, St Albans, Harpenden and other areas of Hertfordshire. If you are unsure of your requirements we can advise you on the best care for your tree.

Thinning is the removal of secondary live woody branches from within the crown to reduce its density. It creates a balanced tree with even growth. Material is removed systematically from throughout the tree rather than from the inner crown only. If the objective is to lessen the overall loading on a defective branch or stem, crown reduction and reshaping are preferable to crown thinning.

This is the removal of outer branches back towards the main trunk to suitable growth points, to reduce the crown’s overall size. Alternatively, selected areas may be reduced to reshape asymmetrical crowns. Reducing the crown alleviates stress and can allow retention of a tree within a confined space. It creates a desired appearance and can make a tree more suited to its surrounding.

The general principle is that, following reduction, there should still be a strong framework of healthy small-diameter branches and twigs. These will then produce dense leaf cover during the following growing season. A crown should normally be reduced in proportion to its original shape but the objective should not simply be to achieve symmetry for its own sake.

In crown reshaping, the height and/or spread of one or more portions of the crown are selectively reduced. It is not necessary to reduce the height and spread of the tree as a whole. The extent of crown reduction should be determined on the basis of the management objective and on the ability of the tree to withstand the treatment.

Crown lifting is the removal of soft growth and lower branches to increase vertical clearance beneath the canopy.  Crown lifting may result in the canopy base not being at one single level but stepped to allow for different clearances; for example where a tree overhangs both a footway and a public highway where different height clearances are required.

Dead-wooding is the removal of all dead, dying or diseased branch wood, including broken branches or stubs left from previous surgery operations, found within the crown of the tree.  Dead wood is cut back to a suitable live and healthy branch junction at the bark ridgeline or to a point where callous growth has formed.

Pollarding is the removal of all the growth of a tree back to the main stem with the objective of producing a quantity of vigorous shoots from the bowl. It is normally undertaken on species such as Lime, Poplar, Plane, Willow.  Pollarding should preferably start soon after the tree has become established and is between 25mm to 50mm in diameter at the selected height of pollarding. The initial pollarding cut should allow some of the pre-existing foliage to be retained, in order to reduce probability of dieback or death and to maintain physiological function.

Once initiated, a pollard should be maintained by cutting the new branches on a cyclical basis.  The frequency of the cycle is decided according to the site management objectives, species, age or condition.  Branches that grow after pollarding should normally be cut at their bases in order to encourage the formation of a knuckle after a number of cycles.

If the pollard cycle has been allowed to lapse over many years, the crown should instead be reduced to the minimum necessary to fulfil the objective. This may be the relief of mechanical stress that would otherwise be likely to cause the stem to split apart. 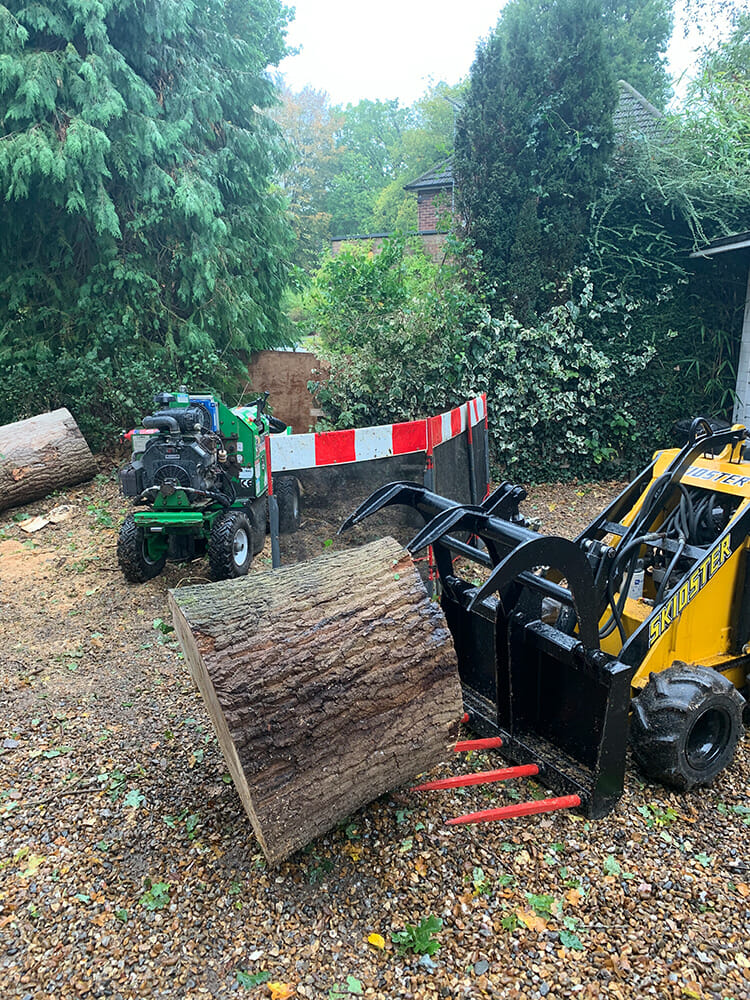 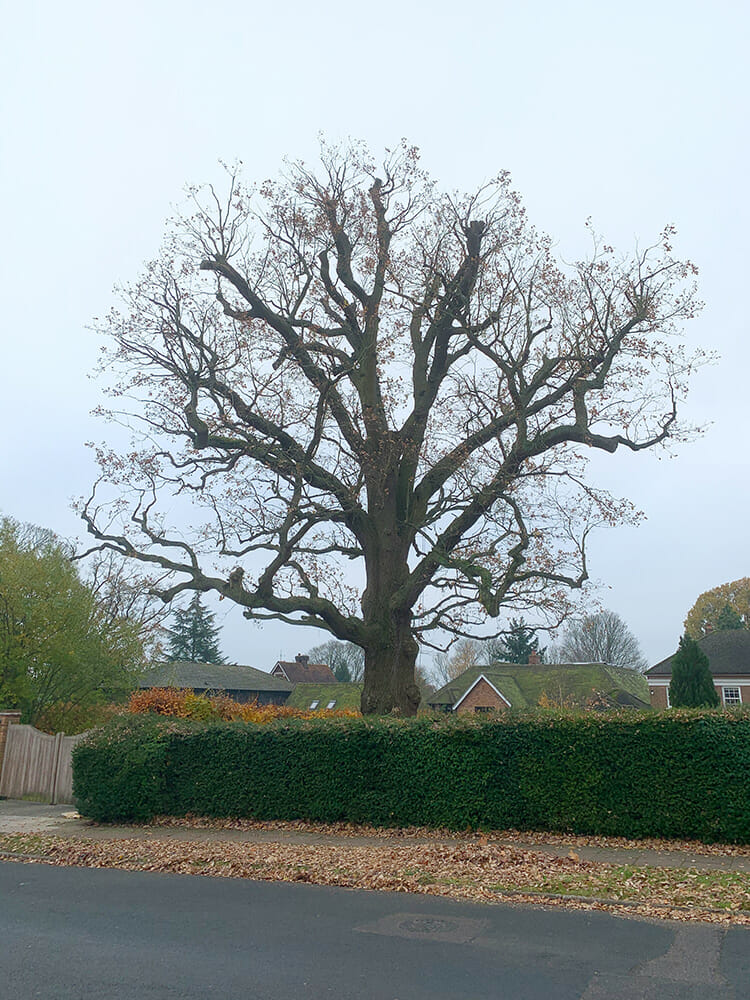 Tree surgery videos: see how we do it 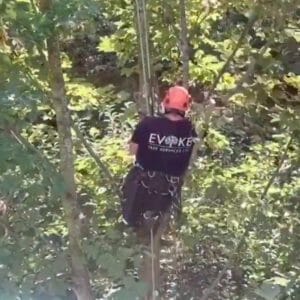 Aerial views of Evoke in action. 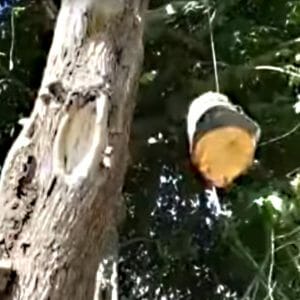 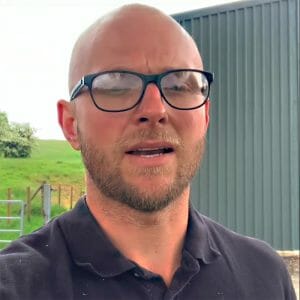 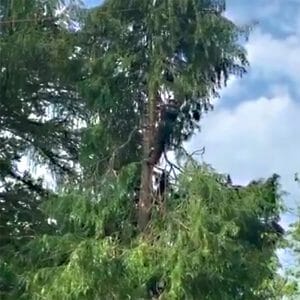 We offer basic maintenance contracts for work such as hedge trimming and regular pruning.

In addition to tree surgery services, we also provide tree planting services across Herts and North London. Contact us today to discuss your requirements.

emma harman
An excellent, knowledgeable and very professional tree specialist service. The team arrived on time and did a fantastic job cutting two very overgrown trees. They left our garden and surrounding area clean and tidy. The 3 guys who came to our property were lovely and friendly. I would 100% recommend this company and will be using them in the future.

Gill W
An excellent, knowledgeable and very professional tree specialist service. Evoke tick every box in terms of being an efficient, reliable company and I would highly recommend them.

Steve Ansell
The team from Evoke came to carry out a reduction on the Oak tree in our garden as well as removing a conifer, and a couple of other bits. Really friendly and helpful and worked extremely hard to get everything done. Tidied everything up and left the garden in a much better state than before they arrived, Very happy with the service received.

Gerry Crux
Thanks to the guys from Evoke Tree Services. They did a wonderful job in terrible weather (wind, rain and sleet), and removed/cleared all branches and cuttings. Would definitely recommend them.

Ted Smith
An excellent service from start to finish. A good discussion about what was needed and what was possible followed by a detailed estimate and a date for the diary. Both oaks were then dead wooded on schedule and the two surgeons clearly took care, being respectful of the tree and surrounding area (plus the overhang to our neighbours). They tidied up and checked we were happy before heading off. We will be using them again as and when needed.

Antonis Kanellopoulos
One of the most professional services I have every received. Responded in time for the initial assessment, provided the quotation quickly, booked the appointment months in advance and they sorted the paperwork with the council. On the day they were very professional, pruned the tree very well and tidied everything, including (bedsides the garden) the alleyway and the roadside where they had parked. Recommended hands down. Many thanks guys!

chris lawson
Great service from start to finish. Dealt with the council application process and carried out the work as promised and tidied up not just our garden but also neighbours where needed.

Gideon “Gman85” Sher
Fantastic, polite, professional, tidy, next year will be 6th year in a row and wont even bother looking elsewhere!

Helen Curtis
Excellent service and great communication. They visited and quoted very quickly. We had to get estate management approval and Evoke took care of all of that. The team were very professional and did an excellent job of pruning the 2 trees and tidying up afterwards. I will definitely use Evoke again

Ben Konopinski
Billy and the team at Evoke are always a delight to see and yet again have done a wonderful job removing two trees and reducing another, Thanks as always for the care and attention!
Google rating score: 5 of 5, based on 136 reviews.